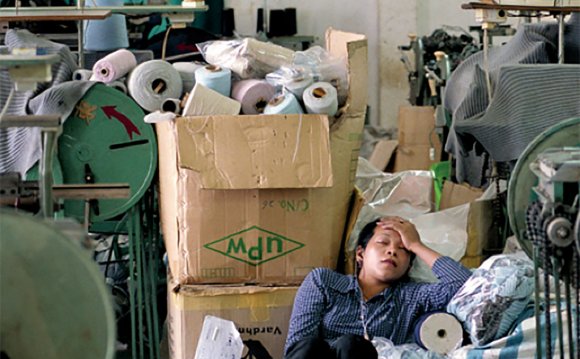 Today, American citizens simply cannot know the working conditions of the factories that make the products they buy. We cannot know how the chemicals, tools, and technologies in these workplaces affect workers. Some brave workers publicize their conditions, and investigative institutions such as Human Rights Watch expose some of the worst violations, but there is an enormous knowledge gap.

This is hugely beneficial for corporations who want to keep us ignorant of their activities. We know about extreme incidents such as the Rana Plaza collapse that capture the world’s attention, however briefly, or when workers get so fed up with the conditions that they strike long enough and loud enough to get the Western world’s attention. But the day-to-day disasters that maim or kill a single worker or the accumulation of lead in workers’ bodies—those go almost completely unreported.

Much of that has taken place in the apparel industry, which has replicated Triangle-era conditions in sweatshops around the world. That it continues targeting women for this exploitative work is hardly surprising, as garment manufacturers did this in New England and the South in the twentieth century. Women need and want to work. For women in the developing world, work can be empowering, providing extra income, independence, or a way to escape an abusive relationship. Theoretically, American companies could provide this empowerment if they paid women a decent wage and employed them in clean factories that did not collapse or catch fire. But as geographer Melissa Wright has noted, employers see these women as “disposable, ” workers to wring every ounce of profit from and then throw their “worthless” bodies out like garbage.

This attitude pervades the entire garment industry. It is hardly surprising then that many women choose the sex trade over the garment industry in nations like Cambodia. The pay is much better.

Some of the first industries to migrate to Mexico en masse after the Border Industrialization Program started were electronics and textiles—relatively low-skill and low-overhead industries find moving to flee regulations highly profitable. By 1994, 2, 065 Mexican factories specifically opened using maquiladora legislation employed 579, 519 people, nearly all in jobs migrated from the United States. Mexico was only the tip of the iceberg, and by the 1990s the geography of production extended into Central America and through Southeast Asia. This made American companies tremendous amounts of money. In 1993, the cost of labor in Malaysia was 10 percent of that in the United States, and in China it was only 3 percent.

In 1970, about one thousand women engaged in textile manufacturing in Malaysia. A decade later, eighty thousand women worked in textile, food processing, and electronics factories. A 1983 study of maquiladora workers in Ciudad Juárez, Mexico, showed an overwhelming young, single and female workforce. Eighty-five percent of the maquiladora workers were female. Electronics workers averaged only 20 years of age. American companies and Mexican maquiladora owners chose women for their supposed physical advantages, but really they chose them because they were paid less and were supposedly easy to control.

One Juárez electronics plant manager, referring to women as “patient” and “highly productive, ” said, “In all cultures, ” women “have the greater manual dexterity ... This is why we prefer to use female workers in our plants.” This low-wage labor did not lead to improved income equality for women workers. In Mexico in 1980, women made 80 percent of men’s wages. Twelve years later, that had fallen to 57 percent. With women seen as disposable, plant managers do nothing to protect them from unsafe working conditions. The women soldering in electronics plants routinely burn their hands. The bad light of the factories causes their sight to diminish, while the acids and solvents workers use poison their bodies.

Women make up the vast majority of the workforce, but men make up the supervisors. Sexual harassment is endemic. A 2006 report by Mexican labor and feminist organizations detailed massive sexual harassment in maquiladoras. Labor authorities ignore or downplay this harassment, not wanting to anger the corporations who could move again at a moment’s notice. A Human Rights Watch survey from 2002 found widespread unreported sexual harassment and intimidation at Guatemalan maquiladoras, where women made up 80 percent of the eighty thousand workers. Forty-six percent of these factory workers had experienced mistreatment from their boss, and five percent had been subjected to sexual advances. Analysts consider these numbers underestimates, arguing that many women naturalize sexual harassment and refuse to report it or admit that it is happening to them.

Employers also discriminate against pregnant women. This has a long history: RCA fired pregnant electronics workers in its Bloomington, Indiana, plant in the 1940s. Preemployment pregnancy examinations are common today, as contractors do not want to give pregnant workers paid leave. Kimberly Estrada, a worker at a Dong Bang Fashions factory in Chimaltenango, reported that she had to undergo a gynecological exam by a company doctor at the factory before she could work. If workers became pregnant while employed, their bosses would not give them time off to go to the doctor nor the maternity leave mandated by the Guatemalan labor code. Women have miscarried at work, unable to get the medical treatment they needed to save their babies.

Human rights groups in the United States and Mexico filed a complaint in 1997 over what they called “state-tolerated sex discrimination against prospective and actual female workers in the maquiladora sector along the U.S.-Mexico border, ” focusing on pregnancy testing and discrimination against pregnant workers. This pressure led to American companies announcing the end of pregnancy testing in the maquiladoras and Mexico issuing new directives to labor officials to stop it. Members of Congress introduced legislation to make pregnancy testing in American-owned factories illegal, suggesting that in fact American politicians could do much more to regulate the conditions of work overseas than they usually claim. But the textile companies found Mexican wages too high anyway, and they simply moved the jobs to Central America and Southeast Asia, forcing the struggle to start anew.