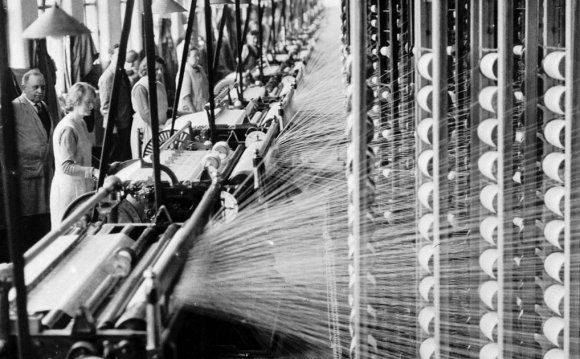 By 1750 wool was one of Britain’s oldest industries, and the major source of wealth for the nation. This was produced by the ‘domestic system’, a vast network of local people working from their homes when they were not otherwise engaged in the agricultural sector. Wool would remain the main British textile until around 1800, but there were challenges to it in the first part of the eighteenth century.

As cotton began to come into the country, the British government passed a law in 1721 banning the wearing of printed fabrics, designed to restrict the growth of cotton and protect the wool industry. This was repealed in 1774, and demand for cotton fabric soon boomed. This steady demand caused people to invest in ways to improve production, and a series of technological advances throughout the late eighteenth century led to huge changes in the methods of production – including machines and factories – and stimulating other sectors. By 1833 Britain was using a huge amount of US cotton production. It was among the first industries to use steam power, and by 1841 had half a million workers.

The Changing Location of Textile Production

In 1750 wool was produced largely in East Anglia, West Riding and the West Country. The West Riding in particular was near both sheep, allowing local wool to save transport costs, and plentiful coal, used to heart up the dyes. There were also many streams to use for watermills. In contrast, as wool declined and cotton grew, the major British textile production concentrated in South Lancashire, which was near Britain’s main cotton port of Liverpool. This region also had fast flowing streams – vital at the start – and soon they had a trained workforce. Derbyshire had the first of Arkwright’s mills.

From Domestic to Factory

The style of business involved in wool production varied across the country, but most areas used the ‘domestic system’, where the raw cotton was taken to many individual houses, where it was process and then collected. Variations included Norfolk, where spinners would gather their raw materials and sell their spun wool to merchants. Once woven material had been produced this was marketed independently. The outcome of the revolution, facilitated by new machines and power technology, was large factories containing many people doing all the processes on behalf of an industrialist.

This system did not form immediately, and for a while you had ‘mixed firms’, where some work was done in a small factory – such as spinning – and then local people in their homes performed another task, such as weaving. It was only in 1850 that all cotton processes had been fully industrialised. Wool remained a mixed firm longer than cotton.

The Bottleneck in Cotton and Key Inventions

Cotton had to be imported from the USA, whereupon it was blended to achieve a common standard. The cotton was then cleaned and carded to remove husks and dirt, and the product is then spun, weaved, bleached and died. This process was slow because there was a key bottleneck: spinning took a long time, weaving was much faster. A weaver could use a person’s entire weekly spinning output in one day. As demand for cotton rose higher, there was thus an incentive to speed this process up. That incentive would be found in technology: the Flying Shuttle in 1733, the Spinning Jenny in 1763, the Water Frame in 1769 and the Power Loom in 1785. These machines could operate more effectively if linked together, and sometimes demanded bigger rooms to operate in and more labour than one household could produce to maintain peak production, so new factories emerged: buildings where many people gathered to perform the same operation on a new ‘industrial’ scale.

The Role of Steam

In addition to cotton handling inventions, the steam engine allowed these machines to operate in large factories by producing plentiful, cheap energy. The first form of power was the horse, which was expensive to run but easy to set up. From 1750 to 1830 the water wheel became the essential source of power, and the prevalence of fast flowing streams in Britain allowed demand to keep up. However, demand outstripped what water could still cheaply produce. When James Watt invented the rotary action steam engine in 1781, they could be used to produce a continuous source of power in the factories, and drive many more machines than water could.

However, at this point steam was still expensive and water continued to dominate, although some mill owners used steam to pump water back uphill into their wheel’s reservoirs. In took until 1835 for steam power to really become the cheap source required, and after this 75% of factories used it. The move to steam was partly stimulated by the high demand for cotton, which meant factories could absorb the expensive set up costs and recoup their money.