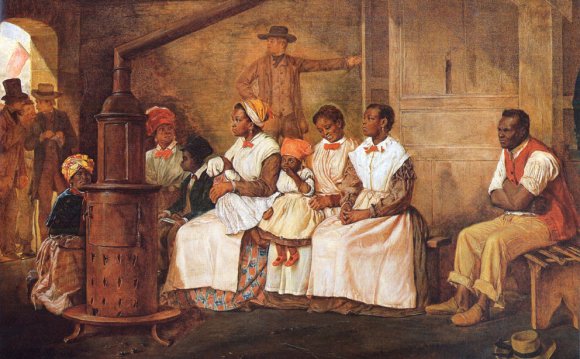 In the decades leading up to the Civil War, the Southern states experienced extraordinary change that would define the region and its role in American history for decades, even centuries, to come. Between the 1830s and the beginning of the Civil War in 1861, the American South expanded its wealth and population and became an integral part of an increasingly global economy. It did not, as previous generations of histories have told, sit back on its cultural and social traditions and insulate itself from an expanding system of communication, trade, and production that connected Europe and Asia to the Americas. Quite the opposite, the South actively engaged new technologies and trade routes while also seeking to assimilate and upgrade its most “traditional” and culturally engrained practices—such as slavery and agricultural production—within a modernizing world.

Beginning in the 1830s, merchants from the Northeast, Europe, Canada, Mexico, and the Caribbean flocked to Southern cities, setting up trading firms, warehouses, ports, and markets. As a result, these cities—like Richmond, Charleston, St. Louis, Mobile, Savannah, and New Orleans, to name a few—doubled, and even tripled, in size and global importance. Populations became more cosmopolitan, more educated, and wealthier. Systems of class—lower-, middle-, and upper-class communities—developed where they had never clearly existed.

Ports that had once focused entirely on the importation of slaves, and shipped only regionally, became homes to daily and weekly shipping lines to New York City, Liverpool, Manchester, Le Havre, and Lisbon. The world was, slowly but surely, coming closer together; and the South was right in the middle.

In November of 1785, the Liverpool firm of Peel, Yates, & Co. imported the first seven bales of American cotton ever to arrive in Europe. Prior to this unscheduled, and frankly unwanted, delivery, European merchants saw cotton as a product of the colonial Caribbean islands of Barbados, Saint-Domingue (now Haiti), Martinique, Cuba, and Jamaica. The American South, though relatively wide and expansive, was the go-to source for rice and, most importantly, tobacco.

Few knew that the seven bales sitting in Liverpool that winter of 1785 would change the world. But they did. By the early 1800s, the American South had developed a niche in the European market for “luxurious” long-staple cotton grown exclusively on the Sea Islands off the coast of South Carolina. But this was only the beginning of a massive flood to come, and the foundation of the South’s astronomical rise to global prominence. Before long, botanists, merchants, and planters alike set out to develop strains of cotton seed that would grow further west on the Southern mainland, especially in the new lands opened up by the Louisiana Purchase of 1803—an area that stretched from New Orleans in South to what is today Minnesota, parts of the Dakotas, and Montana.

The discovery of Gossypium barbadense—often called “Petit Gulf” cotton—near Rodney, Mississippi, in 1820 changed the American and global cotton markets forever. “Petit Gulf, ” it was said, slid through the cotton gin—a machine developed by Eli Whitney in 1794 for deseeding cotton—more easily than any other strain. It also grew tightly, producing more usable cotton than anyone had imagined to that point. Perhaps most importantly, though, it came up at a time when land in the Southwest—southern Georgia, Alabama, Mississippi, and northern Louisiana—became readily available for anyone with a few dollars and big dreams. Throughout the 1820s and 1830s, the federal government implemented several forced migrations of Native Americans, establishing a system of reservations west of the Mississippi River upon which all eastern peoples were required to relocate and settle. This, enacted through the Indian Removal Act of 1830, allowed the federal government to survey, divide, and auction off millions of acres of land for however much bidders were willing to pay. Suddenly, farmers with dreams of owning a large plantation could purchase dozens, even hundreds, of acres in the fertile Mississippi River Delta for cents on the dollar. Pieces of land that in other, more developed places would cost thousands of dollars sold in the 1830s for several hundred, at prices as low as 40¢ per acre.