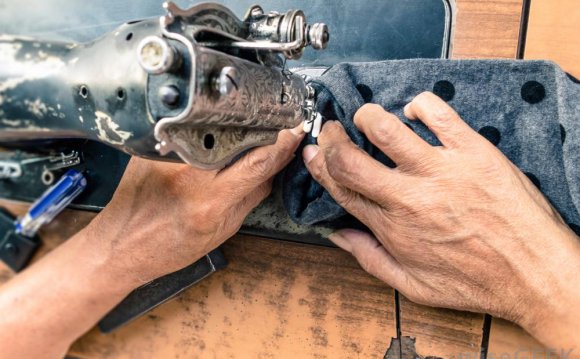 A machine for joining or finishing sections of garments. It is used in the clothing, knitwear, footwear, and other branches of light industry as well as in the home.

The sewing machine was invented in the second half of the 18th century. The first designs typically imitated the method of hand stitching. After J. Madersperger invented the needle with the eye at the point in 1814, a number of investigators (Fisher, Gibbons, W. Hunt, E. Howe, and others) began working to devise stitching that would make use of such a needle. In 1845, Howe obtained a US patent for a lockstitch sewing machine that operated at a rate of 300 stitches per min. The needle in Howe’s machine moved horizontally, and the fabrics being sewn were positioned in a vertical plane and could only be moved along a straight line. In the machines designed by Gibbs, I. M. Singer (1851), and A. B. Wilson (1850), the needle was arranged in a vertical position, and the fabric, which was held by a presser foot, was positioned on a horizontal platform and advanced intermittently by a gear wheel (later, by a rack). With development the sewing machine became more complex and was improved; it has become faster and more specialized.

Depending on the application, sewing machines may be classified as conventional stitching (single-needle and multineedle), serging, blind-stitching, button-sewing, and other types. A distinction is also made between universal machines that can sew various kinds of seams, stitches of different lengths, and stitches in different directions and specialized machines designed to perform specific operations; the latter are usually semiautomatic. Sewing machines are also subdivided into two groups according to the interlacing of the thread in a stitch: machines with a lockstitch and those with a chain stitch. All machines in each subgroup have many features in common, such as the principle of operation and the design of the operating members.

The most common universal machines are single-needle, lockstitch types, in which the needle, thread tensioner, shuttle, and cloth-moving mechanisms are the major elements. The needle mechanism imparts a reciprocating or oscillating motion to the needle, which has the thread passing through its eye. The material is punctured by the needle, the needle thread is drawn through the material from above, and a loop is formed by the eye of the needle. The shuttle mechanism captures the loop and passes it around a bobbin case. The thread tensioner unwinds thread from a spool, pulls it from the shuttle, and tightens the stitch. The cloth-moving mechanism shifts the material a distance equal to the length of the stitch. All mechanisms are driven from a main shaft that is rotated by an electric or mechanical drive.

The design, dimensions, shape, speeds, and other characteristics of the sewing machines used industrially (as in the clothing industry) are dictated by the assigned tasks, the size of the articles, the properties and thickness of the material, and other considerations. Many machines are equipped with mechanisms for trimming the fabric, pinking, and other functions. Machines used in the home are also of the universal lockstitch type. In addition to straight sewing, they can sew zigzag stitches, which are used to serge cloth parts, attach lace and appliqué, and finish articles. The use of additional, interchangeable attachments on such machines makes it possible to serge buttonholes and sew on hooks and buttons.

The largest group of universal stitching machines is composed of single-needle machines for single-thread and especially two-thread chain stitching, which provides more flexible and stretch-able seams compared with those of lockstitch machines. The most common multineedle machines are two-needle types, but machines having three and four needles are also in use. Models with up to 12 or 14 needles are used to fasten materials in parallel stitches.

Serging machines may be used to stitch a material and simultaneously serge parts or only to serge the edge of the material to provide bar tacks. They usually produce a chain stitch and are used especially in the manufacture of knitwear and fur articles. Zigzag machines are used to join materials edge to edge, to serge a section of fabric, to make seams for certain linings, to sew on lace, and to finish articles. Machines in this group produce both simple and complicated stitches with a lockstitch or chainstitch type of thread interlacing. Machines capable of blind stitching are intended for making running stitches on collars and side interlin-ings and for various other operations in which topstitches and running stitches are used. In such machines a curved needle oscillates along an arc, penetrates the first fabric completely, but only partially penetrates the second (face) fabric, so that the stitches are not visible from the front. The threads may be interlaced as in a lockstitch or a chain stitch.

Button sewers are used to attach flat buttons having two or four holes and shank buttons, as well as to wind thread around the button shank. Buttonholers fashion the edges of buttonholes, cut the apertures to the required size and shape, provide bar tacks on slit ends, and cut off the ends of the thread when the sewing is completed. They use carcass thread to sew straight buttonholes without bars or with two bars at each end and fancy buttonholes with an eyelet. In embroidery machines, several needles, shuttles, and fabric-moving mechanisms operate in synchronism and produce the same pattern simultaneously on several pieces of cloth held in embroidery frames. The frames are moved simultaneously in a specific direction over the necessary distance corresponding to the pattern being embroidered. Button sewers, buttonholers, embroidery machines, bar-tack machines, and various other types of sewing machines are semiautomatic. Similar machines are used to join fabrics with welded or glued seams.