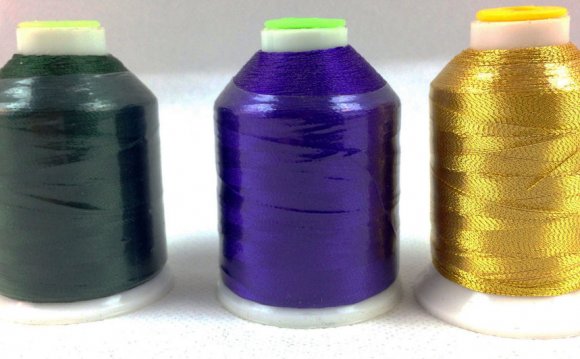 So here's the deal: for free motion quilting, I only use . For piecing and applique, I use Gutterman Cotton or Mettler Metrosene.

I've come to use these threads after experimenting and finding what worked the best, not only for my machine, but also my budget.

Here's the full story about how I came to use Isacord on my quilts, and so far at least, I haven't been struck my lightning, seen a quilt get shredded, or experienced anything to show that this was a bad choice.

When I started quilting, I believed in the Cotton on Cotton on Cotton propaganda. You know - the idea that quilters can only use cotton fabric, with a cotton batting, stitched with cotton thread?

I don't know where I learned this from, but I know I believed in it religiously when I first got started quilting.

I happily pieced my quilts, then basted them with a cheap cotton batting from Walmart. At first, I quilted with cotton Coats and Clarks thread, but soon found spools of serger thread to be cheaper.

Of course, this was back when I quilted only with my walking foot, so the thread didn't need to be super strong since the walking foot was doing all the work.

I thought this was normal at the time, and just got into the habit of brushing out my machine every single day. Unfortunately I couldn't remove the covers to a Viking machine I was using at the time, and I ended up breaking a part in the bobbin case after it clogged with so much lint.

The man that fixed it warned me then to start looking for threads that wouldn't produce so much lint.

So I began trying new things. As I progressed through the beginning stages of quilting, I began to play with many different threads from rayon to invisible. While I like the idea of invisible thread, I've never liked it on my quilts. It kind of gives me a weird feeling, like I'm quilting with plastic.

It wasn't until I started quilting that I began to see that cotton thread might not be all it's cracked up to be. By this time I was using a higher quality Gutterman 100% cotton, but the lint buildup in the machine was still ridiculous. I was also struggling to quilt designs like Pebbling and because I couldn't travel stitch much at all before the thread would break.

The stitches on the quilt didn't look that great to my eyes. From reading I'd learned about Bottom Line bobbin thread. Trying it out and seeing that super fine, super thin thread on the surface of my quilt made the cotton look like a child's crayon drawing in comparison.

Suddenly I saw no lint building up, and no longer had to obsess about brushing my machine out every night to remove those hair balls. Unfortunately, my machine didn't like Bottom Line thread very much. I loved it, but my machine ate it more than it stitched with it!

There's nothing I hate more than sitting down to my machine, starting to stitch, and breaking thread. Something about it sets my teeth on edge, and I just never could get the hang of using that thread.

By this time I'd finished quilting The Duchess and had been asked to quilt the raffle quilt, Baskets in Bloom, for my local quilt guild. I went to a local quilt shop and began looking around. There HAD to be more threads available that could handle the speed of free motion quilting the way I wanted to quilt.

I brought home a couple different spools of cotton blends, Mettler Metrosene, and Isacord. After stitching samples and breaking thread a few times on the other threads, I tried the spool of Isacord.

What a difference! Finally a thread that fed smoothly and evenly, didn't skip stitches, didn't built up massive amounts of lint, and my machine didn't want to eat it for lunch!

Isacord wasn't as thin as Bottom Line Thread, but it also isn't as thick as cotton. It's much stronger too and doesn't break or shred, even when I stitch over my stitching lines multiple times.