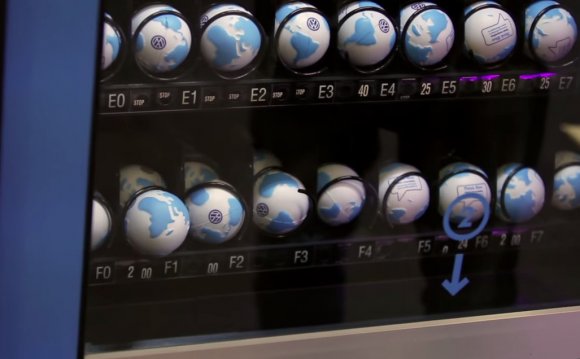 We know that 3D printing is making it easier for inventors everywhere to create prototypes of their designs. At Virginia Tech, students can even get a prototype the same way they'd buy a can of Coke. The campus is now home to the Dream Vendor, a one-of-a-kind vending machine made up of four Makerbot Thing-O-Matic 3D printers, each one loaded with a different-color plastic. Users insert a personal SD card loaded with a file of their CAD-drawn 3D model into one of the machine's four interface boards. The selected printer then builds the 3D model layer by layer in cross-sections.

A cross between Dance Dance Revolution and a 1980s soda commercial, this vending machine in a South Korean mall will give a free Coke to anyone with enough dancing skill. Players begin by standing on a red circle in front of the machine and watching the built-in multipanel video display. On the screen, members of local boy band 2PM start to groove. You're supposed to emulate their steps, and the better you do, the better your chances of nabbing the prize. The vending machine/video game uses Microsoft's Kinect, a motion-sensing input device that tracks a user's moves with an infrared projector, to decide whether you've got the moves.

Hoping to dispense vending machine java that's actually drinkable, Starbucks first rolled out its “heat on demand” machines several years ago. They rely on a process developed by Pepsi that uses supercooled liquid, a mixture that can be reduced below its freezing point without solidifying. When you order a cup of joe, a button triggers nucleation, which causes the mixture to crystallize immediately, creating ample heat in the process. The company's newest machines, Starbucks on the Go, are stocked with espresso that is freshly ground when you order, and milk that is individually steamed for each drink. The machines (introduced in the U.K. last fall) feature a touchscreen interface from which you can choose 280 drink combos. The first four machines rolled out in the U.S. this fall, with thousands more expected throughout the country at gas stations and office buildings.

It's not delivery—it's a vending machine. With Netherlands-based A1 Concepts' Let's Pizza, choose from one of four pies. The machine kneads the dough—a combination of flour and mineral water designed just for this machine—then works it into a crust, layers it with tomato sauce and cheese, adds toppings, and pops the pie it into an infrared oven to bake. Voilà—a 10.5-inch pizza in about 2-1/2 minutes. Each Let's Pizza machine is connected to the Internet so it can automatically send an alert for replenishments when ingredients run low. The machines are popular in the U.K. and throughout Europe and might come to the U.S.

When it comes to choosing the type of auto shipping, the enclosed trailer or container is considered to be the safest option as it provides your vehicle with greater protection. Though this method is safe, you will have to pay up to 50% more comparing to open trailers shipment. Anyways, it is always up to you to decide whether your car worth money you will have to spend on enclosed trailer shipment.