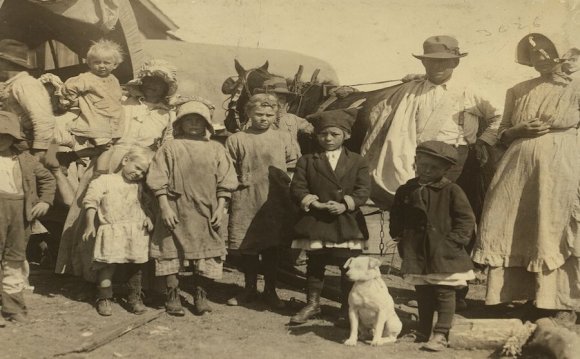 In the summer of 1799 a rumour circulated that there was going to be an agreement between the church wardens and the overseers of St. Pancras Workhouse and the owner of a great cotton mill, near Nottingham. The children were told that when they arrived at the cotton mill, they would be transformed into ladies and gentlemen: that they would be fed on roast beef and plum pudding, be allowed to ride their masters' horses, and have silver watches, and plenty of cash in their pockets. In August 1799, eighty boys and girls, who were seven years old, or were considered to be that age, became parish apprentices till they had acquired the age of twenty-one.

The young strangers were conducted into a spacious room with long, narrow tables, and wooden benches. They were ordered to sit down at these tables - the boys and girls apart. The supper set before them consisted of milk-porridge, of a very blue complexion! The bread was partly made of rye, very black, and so soft, they could scarcely swallow it, as it stuck to their teeth. Where is our roast beef and plum-pudding, he said to himself.

The apprentices from the mill arrived. The boys had nothing on but a shirt and trousers. Their coarse shirts were entirely open at the neck, and their hair looked as if a comb had seldom, if ever, been applied! The girls, like the boys, destitute of shoes and stockings. On their first entrance, some of the old apprentices took a view of the strangers; but the great bulk first looked for their supper, which consisted of new potatoes, distributed at a hatch door, that opened into the common room from the kitchen.

There was no cloth laid on the tables, to which the newcomers had been accustomed in the workhouse - no plates, nor knives, nor forks. At a signal given, the apprentices rushed to this door, and each, as he made way, received his portion, and withdrew to his place at the table. Blincoe was startled, seeing the boys pull out the fore-part of their shirts, and holding it up with both hands, received the hot boiled potatoes allotted for their supper. The girls, less indecently, held up their dirty, greasy aprons, that were saturated with grease and dirt, and having received their allowance, scampered off as hard as they could, to their respective places, where, with a keen appetite, each apprentice devoured her allowance, and seemed anxiously to look about for more. Next, the hungry crew ran to the tables of the newcomers, and voraciously devoured every crust of bread and every drop of porridge they had left.

The room in which Blincoe and several of the boys were deposited, was up two pair of stairs. The bed places were a sort of cribs, built in a double tier all round the chamber. The apprentices slept two in a bed. The governor called the strangers to him and allocated to each his bed-place and bed-fellow, not allowing any two of the newly arrived inmates to sleep together. The boy whom Blincoe was to chum, sprang nimbly into his birth, and without saying a prayer, or anything else, fell asleep before Blincoe could undress himself. When he crept into bed, the stench of the oily clothes and greasy hide of his sleepy comrade, almost turned his stomach.

Blincoe was assigned to a room, over which a man name Smith presided. The task first allotted to him was to pick up the lose cotton, that fell upon the floor. Apparently, nothing could be easier, and he set to with diligence, although much terrified by the whirling motion and noise of the machinery, and not a little affected by the dust and flue which he was half suffocated. Unused to the stench, he soon felt sick, and by constantly stooping, his back ached. Blincoe, therefore, took the liberty to sit down; but this attitude, he soon found, was strictly forbidden in cotton mills. Smith, his task-master, told him he must keep on his legs. He did so, till twelve o'clock, being six hours and a half, without the least intermission.

After Blincoe had been employed in the way described, he was promoted to the more important employment of a roving winder. Being too short of statue, to reach to his work, standing on the floor, he was placed on a block. He was not able by any possible exertion, to keep pace with the machinery. In vain, the poor child declared he was not in his power to move quicker. He was beaten by the overlooker, with great severity. In common, with his fellow apprentices, Blincoe was wholly dependent upon the mercy of the overlookers, whom he found, generally speaking, a set of brutal, ferocious, illiterate ruffians. Blincoe complained to Mr. Baker, the manager, and all he said to him was: "do your work well, and you'll not be beaten." The overlooker, who was in charge of him, had a certain quantity of work to perform in a given time. If every child did not perform his allotted task, the overlooker, and was discharged.