Factory name in the Industrial Revolution 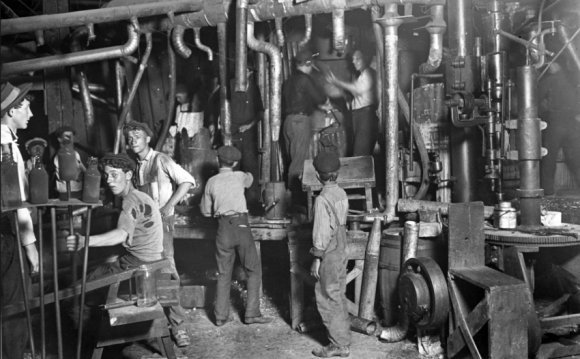 Richard Arkwright is the person credited with being the brains behind the growth of factories. After he patented his spinning frame in 1769, he created the first true factory at Cromford, near Derby.

This act was to change Great Britain. Before very long, this factory employed over 300 people. Nothing had ever been seen like this before. The domestic system only needed two to three people working in their own home. By 1789, the Cromford mill employed 800 people. With the exception of a few engineers in the factory, the bulk of the work force were essentially unskilled. They had their own job to do over a set number of hours. Whereas those in the domestic system could work their own hours and enjoyed a degree of flexibility, those in the factories were governed by a clock and factory rules.

Edmund Cartwright’s power loom ended the life style of skilled weavers. In the 1790’s, weavers were well paid. Within 30 years many had become labourers in factories as their skill had now been taken over by machines. In 1813, there were only 2, 400 power looms in Britain. by 1850, there were 250, 000.

Factories were run for profit. Any form of machine safety guard cost money. As a result there were no safety guards. Safety clothing was non-existant. Workers wore their normal day-to-day clothes. In this era, clothes were frequently loose and an obvious danger.

Some factory owners were better than others when it came to looking after their work force. Arkwright was one of these. He had some harsh factory rules (such as workers being fined for whistling at work or looking out of the window) but he also built homes for his work force, churches and expected his child workers to receive a basic amount of education. Other owners were not so charitable as they believed that the workers at their factories should be grateful for having a job and the comforts built by the likes of Arkwright did not extend elsewhere.

At the time when the Industrial Revolution was at its height, very few laws had been passed by Parliament to protect the workers. As many factory owners were Members of Parliament or knew MP’s, this was likely to be the case. Factory inspectors were easily bribed as they were so poorly paid. Also there were so few of them, that covering all of Britain’s factories would have been impossible.

Factories rarely kept any records of the ages of children and adults who worked for them. As employment in cities could be difficult to get, many people did lie about their age – and how could the owner know any better ? Under this system, children in particular suffered.