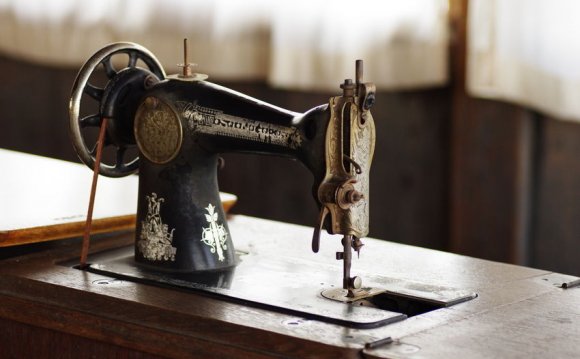 Fargosmom here – making a brief introduction. I was dismayed, as many of you may have been, to think that this great blog might disappear into the ether. I am new to the world of antique sewing machines, and I came to this blog in search of some basic technical information. What I found was much more – an archive of useful information, not only packaged in a clean format, but accompanied by some absolutely lovely writing, and a wry and witty personality to back it up. I’ve never met Sid or Elsie, but I wish they were my next door neighbors.

So I’m here to do my feeble best to keep this resource available while S & E ride off into the sunset. I wish them health, happiness, and a long future with no tangled bobbins in sight.

To the rest of us, here’s to keeping those old iron ladies stitching.

OK … quite a few people seem to have been dismayed by the thought of this blog vanishing, so the good news now is that it’s not going to. I am, but the blog isn’t.

It’s now staying at this URL, although Mission Control will henceforth be in southern California rather than southern England, thanks to fargosmom who’s kindly volunteered to take it over.

I’ll be keeping my Elna Grasshopper blog going, but Elsie and I are out of here now, and we leave you in the tender care of fargosmom.

Just so that it doesn’t come as a surprise and you think the aliens have abducted this blog, you need to know that its days are now numbered. Quite what that number is I’m not sure, but it’s probably around 80. And when its number’s up, I guess it will just do whatever it is that obsolete blogs do.

In other words the domain registration for this URL comes up for renewal again in June (or maybe July – I can’t find the email from WordPress right now), and I won’t be renewing it. Why not? In a word, I have neither the time now nor the inclination to continue with it – even though it’s still averaging 200 visitors and 400 page views per day. Heck, I can’t even keep my Grasshopper blog up to speed, which needs nothing like the same amount of work!

So there you go.

When I find out the exact date of its demise, I’ll let you know …

First off this week, I’ve been meaning to post this picture ever since Andrew kindly sent it to me. This is the adaptor I was referring to in November when I was rambling on about how once upon a time people could plug things like a sewing machine into a table lamp or indeed a pendant light fitting and still get to see what they were doing.

Andrew’s is actually the posh version with the push switch controlling the socket on the side, and as it’s seen in the picture, both bulbs will light up when the whole shebang’s plugged into a light fitting. When that red push switch is pushed back towards the camera (from the other side of the adaptor), only the “straight ahead” bulb is lit. Substitute the connector on your sewing machine for that bulb on the side and off you go! For total authenticity though, make sure the whole thing’s plugged into a light fitting which has a parchment shade which smells hot and has both scorch marks and a looped decorative trim dangling all the way round it …

Moving on, I must just mention before I forget that Joan, one of the ladies in the States who’s bought a fair few bits and pieces from us over the last year or so, has recently celebrated her 62nd wedding anniversary! That certainly makes our own 31 years seem a bit insignificant, but we were interested to learn of Joan’s theory that collecting interesting sewing things contributes greatly to longevity. Whatever, all the very best from us to Joan and Jim in Michigan 🙂

And now we get to today’s news, which is that from now on this blog’s being relegated to the back burner. And of course you want to know why, so I’d better tell you …

Two years ago today, Elsie was diagnosed with cancer. When I started this blog five months later, we’d done the surgery, we’d just finished chemotherapy, and it gave us something different to think about and do while we waited to start radiotherapy. We had a few ups and downs after radio and then more surgery, but now it’s just a matter of a hormone pill a day for another three and a half years, and fingers crossed it’s all good 🙂

So … Elsie and I need to move on. We’ve thinned out the Singer collection a bit and gained some much-needed space. We have other fish to fry, and I have my Elna Grasshopper blog which really is in dire need of bringing up to speed. Seeing as how that’s very much a minority interest compared to the world of vintage Singers and we’re only talking about one particular machine, it won’t eat up as much of my time as this blog has and the correspondence which it generates does. At least that’s the plan. We shall see.

Meanwhile, I’ve just updated the bargain basement page to show accurately what we have left, so if there’s anything there that you fancy, get in quick and grab yourself a bargain because when they’re gone, they’re gone. Which has to be one of the most banal and singulary stupid slogans ever, but never mind.

Have a good weekend folks, and be happy.

Edited to add In view of the comments that are being posted, we’d both like to say thank you for your very kind words, and to point out that I will still be rambling on from time to time, only on the Elna Grasshopper blog. So do check it out from time to time. Who knows, you might even develop an interest in the amazing little green thing yourself …

Regular readers will recognise Stoner the Bear, but I guess it’ll mainly be our American readers who will also recognise that shiny thing with knobs on.

Yep, we’ve gone and bought ourselves a genuine (pronounced gen-yoo-ein) All American Pressure Canner, and it arrived at lunchtime today having left Wisconsin just three days ago.

We long ago realised that nobody in Europe makes a decent pressure canner, so if we wanted one we’d be stuck with buying from the States via Amazon, but we always said we couldn’t justify paying the horrendous price for the real deal plus shipping. Having done all the research, though, we knew we wouldn’t be happy with anything less than an All American, so there the matter rested.