Manufacturing during the Industrial Revolution 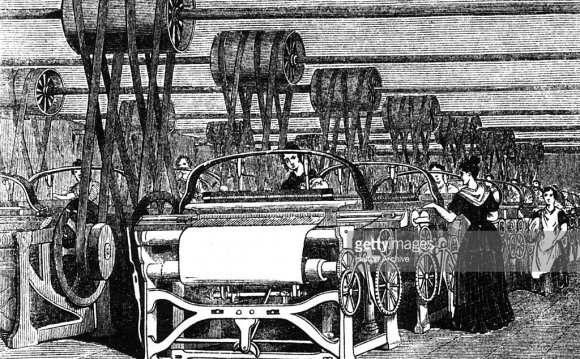 Most products people in the industrialized nations use today are turned out swiftly by the process of mass production, by people (and sometimes, robots) working on assembly lines using power-driven machines. People of ancient and medieval times had no such products. They had to spend long, tedious hours of hand labor even on simple objects. The energy, or power, they employed in work came almost wholly from their own and animals' muscles. The Industrial Revolution is the name given the movement in which machines changed people's way of life as well as their methods of manufacture.

About the time of the American Revolution, the people of England began to use machines to make cloth and steam engines to run the machines. A little later they invented locomotives. Productivity began a spectacular climb. By 1850 most Englishmen were laboring in industrial towns and Great Britain had become the workshop of the world. From Britain the Industrial Revolution spread gradually throughout Europe and to the United States.

Changes That Led to the Revolution

The most important of the changes that brought about the Industrial Revolution were (1) the invention of machines to do the work of hand tools; (2) the use of steam, and later of other kinds of power, in place of the muscles of human beings and of animals; and (3) the adoption of the factory system.

It is almost impossible to imagine what the world would be like if the effects of the Industrial Revolution were swept away. Electric lights would go out. Automobiles and airplanes would vanish. Telephones, radios, and television would disappear Most of the abundant stocks on the shelves of department stores would be gone. The children of the poor would have little or no schooling and would work from dawn to dark on the farm or in the home. Before machines were invented, work by children as well as by adults was needed in order to provide enough food, clothing, and shelter for all.

The Industrial Revolution came gradually. It happened in a short span of time, however, when measured against the centuries people had worked entirely by hand. Until John Kay invented the flying shuttle in 1733 and James Hargreaves the spinning jenny 31 years later, the making of yarn and the weaving of cloth had been much the same for thousands of years. By 1800 a host of new and faster processes were in use in both manufacture and transportation.

This relatively sudden change in the way people live deserves to be called a revolution. It differs from a political revolution in its greater effects on the lives of people and in not coming to an end, as, for example, did the French Revolution.

Instead, the Industrial Revolution grew more powerful each year as new inventions and manufacturing processes added to the efficiency of machines and increased productivity. Indeed, since World War I the mechanization of industry has increased so enormously that another revolution in production is taking place

Commerce and industry have always been closely related. Sometimes one is ahead and sometimes the other, but the one behind is always trying to catch up. Beginning in about 1400, world commerce grew and changed so greatly that writers sometimes use the term "commercial revolution" to describe the economic progress of the next three and a half centuries.

Many factors helped bring about this revolution in trade. The Crusades opened up the riches of the East to Western Europe. America was discovered, and European nations began to acquire rich colonies there and elsewhere. New trade routes were opened. The strong central governments which replaced the feudal system began to protect and help their merchants. Trading firms, such as the British East India Company, were chartered by governments. Larger ships were built, and flourishing cities grew up.

With the expansion of trade, more money was needed. Large-scale commerce could not be carried on by barter, as much of the earlier trade had been. Gold and silver from the New World helped meet this need. Banks and credit systems developed. By the end of the 17th century Europe had a large accumulation of capital. Money had to be available before machinery and steam engines could come into wide use for they were costly to manufacture and install.