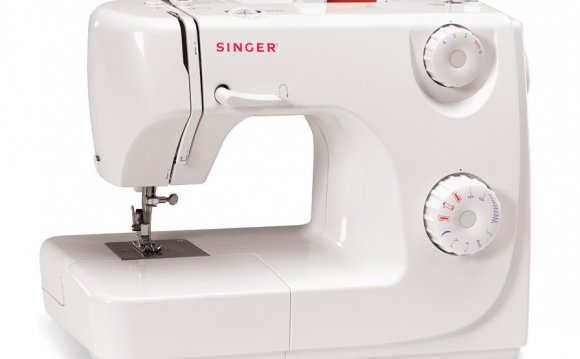 At first glance the Singer Featherweight 221 and 222K sewing machines can look like a child’s toy, as they are so small and compact in their LP sized carrying boxes. However their diminutive size did not detract from their functionality and they became highly popular with occasional sewers because they were so easy to pack neatly away for storage after use.

The Featherweight machines were substantially lighter than previous Singer models. The main casting was aluminium and the whole machine was much lighter at under 12lbs. By comparison, a modern electronic weighs around 16lbs, a 99K hand crank model 24lbs and a motorised 66K a whopping 32lbs! They were characterized by a fixed fold-up extension of the bed to add extra sewing surface on the left hand side of the needle. This fold-up design allowed the machine with its attachments to fit into its own carrying box and still be light enough to be considered portable. Providing only straight stitching they sewed very well for day to day use and separate zig-zag attachments could be bought and fitted in place of the presser foot if this feature was required. Reverse was easy to use by just sliding the stitch length lever upwards. The extremely quiet motor made them a pleasure to use.

From its introduction in 1933 the 221/221K went through 4 major variations until production was finally ceased in the late 1960's. An enhanced 222K freearm model was introduced in 1953.

All of the black Featherweights were decorated with attractive gold decals and the Singer name on the lamp housing, but nowhere did they say the name ‘Featherweight’ on them. Up until 1953 they also didn't have the model number shown, but after this Singer added a riveted plate with the model number just below the badge.

The last Featherweights made were the 221K7's. These were all produced at the Kilbowie plant in Scotland. The K7's were white and quite plain with no decoration except for the Singer name on the lamp cover in gold decals.

For approximately 8 years a 222K variant model was made, the bed of which was detachable to allow "free-arm" sewing of cuffs etc. The 222K also had the added advantage of being able to lower its feed-dogs to allow for embroidery or darning work. Many consider these to be the most attractive collectors sewing machine Singer ever produced and examples in good condition sell for very high prices.

During the very early 1960's a few 221J machines were produced in both Canada and Scotland. Featherweight 221J's were finished in a tan colour and like the 221K7's they were plain without decoration.

During its production period there was a US version and 4 UK versions of the 221 Featherweight and an enhanced 222K freearm machine with removable bed. The easiest way to quickly identify a particular variant is by looking at the motor nameplate, as they each used motors of different types.

The 221K4 is the only variant that had the switch for the light built into the lamp body instead of on the machine base. It also was the only one to use an RF suppression capacitor mounted underneath the baseplate. If this is present then a small green wire with a brass plug should be visible fitted into the lower clamping bolt of the motor case.

The K7 variants had several major changes from earler models. They were painted white without any decorative decals, the hinged extension table was shorter, they used a clamshell style foot controller that was permanently wired into the machine, and the orginal cam and rocker assembly for transferring motion to the bobbin and feed dogs was replaced with a toothed belt system.

The early models of the 221 & 221K had an ‘Egyptian Scrollwork’ pattern on the faceplate whilst those produced later had a simpler striated pattern of vertical stripes.

The carry cases of the 221K and 222K were of different sizes, the latter being shorter and wider. Early 221’s had a tray in the top which rested across the top of the machine and housed the attachments and the power cable and foot controller. Trying to squash the stiff cabling into this narrow area proved difficult so later machines adopted the system also used in the 222’s case. This had the foot controller clipped into a metal frame in the lid of the box and a much smaller box, instead of the tray, attached to the left hand side of the case. This held the attachments and bobbins etc. The black models had a black fabric covered case and the much more modern white version had a two tone light blue base and dark turquoise blue lid.

gold after america tour gold after five dresses gold after hours price gold against the soul gold against inflation gold against us dollar gold against inflation chart gold against loan gold against dollar gold against cash gold against the soul vinyl gold among us gold among us character gold among us pop it gold among the dross gold among the sand gold among us wallpaper gold among the dross meaning gold among us logo gold around america tour gold around pupil gold around the world gold around tooth gold around me gold around teeth gold around the american flag gold around iris gold as an investment gold as inflation hedge gold as a gas gold as a hedge against inflation gold as a conductor gold as an element gold as currency gold as an investment 2021 gold at the bottom of the ocean gold at the bottom of lake michigan gold at the bottom of the pyramid gold at the bottom of niagara falls goldfish at bottom of tank gold at bottom of world trade center gold at bottom of waterfall gold at bottom of american flag gold at the top of the pyramids gold brick top of moving stairs top golf what happened to the gold at the top of the pyramids what happened to the gold on top of the great pyramid gold at the end of the rainbow gold at room temperature gold at fort knox gold at spot gold at the end of the rainbow meaning gold at walmart gold at world trade center gold at higher levels 5e gold before and after etf gold before it is refined gold before processing gold before purification gold before election gold before you wake up gold before mining before gold coast what was the name of ghana gold behind the couch table gold behind currency gold behind waterfall rdr2 gold behind boulders gold behind glass gold behind the names behind gold icon behind gold's rally gold beneath world trade center gold beneath the waves gold beneath dark waters gold beneath the waves pdf gold beneath the waves book gold beneath the southern skies gold chain beneath your shirt gold key beneath the planet of the apes gold bedside table gold bedside lamp gold bedside lamp with usb port gold bedside clock gold bedside sconces gold bedside wall lamps gold bedside table set of 2 gold bedside tables with drawers gold between teeth gold between gap teeth gold between tiles between gold and diamond which is more expensive between gold and platinum which one is expensive between gold and silver which one is expensive between gold and diamond which is more valuable transfer gold between servers wow gold beyond las vegas gold beyond measure gold beyond the sun necklace gold & beyond gold & beyond montgomery alabama gold beyond marlboro gold & beyond on norman bridge road gold & beyond pawn shop gold but a is silent gold but bold gold but old gold but not old gold but no glitter gold buy gold gold but not glitter meaning gold but k is silent gold by the gram gold by the ounce gold by kiiara gold by britt nicole gold by the inch gold by john stewart gold by the gram price gold by commodity contra gold gold in contra costa county gold sodium thiomalate contraindications slim gold contra indicação gold pro contra gold nutrition zma contra indicações 007 contra gold finger ivomec gold contra indicação gold during inflation gold during stagflation gold during deflation gold during recession gold during hyperinflation gold during great depression gold during market crash gold during 2008 crash gold even gold evening gown gold evening dress gold event center even gold is tested by fire even gold can rust lyrics even gold can rust event gold class except gold gold for cash gold for sale near me gold for cash near me gold for sale online gold for america tour gold for jewelry making gold for childhood cancer gold from itsfunneh gold from electronics gold from india gold from dubai gold from pokemon
Source: www.singersewinginfo.co.uk