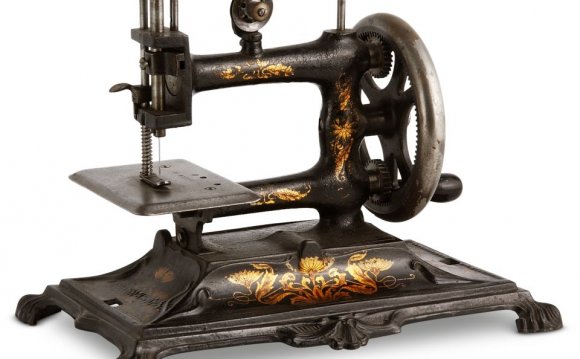 Elias Howe, Jr. was born on a farm near Spencer, Massachusetts in 1819. He left the farm at age 16 and traveled to Lowell, Massachusetts seeking to apprentice in a machine shop. After the financial panic of 1837 he lost his job in Lowell and moved to Boston, finding work in the shop of Ari Davis making mariner's tools and scientific equipment. Due, perhaps, to the inquisitive-minded nature of the clientele, inventing dreams and gossip were often discussed in Davis' shop. Local legend has it that this is how Howe gained the inspiration for his sewing machine. When an inspiring inventor brought in a knitting machine seeking encouragement, Davis replied to the man, “Why are you wasting your time over a knitting machine? Take my advice, try something that will pay. Make a sewing machine.” The customer replied, “It can't be done, ” but Howe wasn't so sure.

There were additional factors in Howe's life which contributed to his interest in making a sewing machine. He was born with a physical disability-a type of a lameness-which increasingly made his work as a laborer more difficult and more painful. In 1843, when he was forced from work for a time due to his disability, his wife took up odd-job sewing to pay the family bills. Watching her work, he realized that the elusive sewing machine could solve all of his family's financial and physical difficulties and dedicated himself to the project.

Financial limitations were Howe's greatest obstacle—where to work, how to buy to supplies, and how to support his family without a paying job. Cambridge came to his rescue. His father had recently opened a factory in the city, and so Howe was free to set up shop in the factory for his own work. Sadly, however, the factory burned down not long after it opened. Howe was saved by a generous and business-minded Cantabrigian named George Fisher. A friend of Howe's, Fisher saw merit in Howe's idea. Fisher agreed to house Howe and his family as well invest $500 into the project in return for a half interest in the patent if one was obtained. Howe began full time work on it, and the project lived on.

Within two years, by May 1845, Howe had a machine that was sewing seams. By July he finished his first two suits of wool clothes—one for George Fisher and one for himself. But to do more than his predecessors had been able to do, Howe had to interest the public in his machine. He put on a display, a race against five seamstresses, and his machine finished five entire seams before any of the seamstresses finished one. The crowds remained wary, however, and the protests of the local tailors proved effective—Howe did not receive a single order for his machine.

Undaunted, Howe continued on. He finished a second machine and was awarded U.S. patent #4750 on September 10, 1846. George Fisher, his loyal investor, was growing frustrated after funding the project for more than two years without any returns. Howe sent his brother Amasa Howe to England, hoping to find a more willing potential market. Amasa met William Thomas, a manufacturer of umbrellas, corsets, and leather goods, and struck a deal in which Elias went to England to work on a new machine specifically adapted for corset making, and he sold one of his original machines to Thomas for 250 pounds sterling.

England quickly proved no better for Howe, and his troubles continued. He was never able to finis hthe adapted machine, and he sold what little he had managed to accomplish to Thomas for five pounds. Broke and unemployed in a foreign country, he got word from America that his wife was gravely ill. In order to earn enough money to travel back home, Howe pawned his remaining original machine and his patent papers. Once back in America, he suffered a terrible personal blow with the death of his wife, but in time realized that sewing machines had become popular in his absence. Even more shocking was that the machines being sold were based on his design. He quickly repurchased his machine and patent papers from the London pawnshop, and then began to send letters to the suspected patent-infringers. This ultimately forced Howe into court, which was expensive but his family and friends again came to his aid. His two major cases were against Walter Hunt and Issac Singer, and he won both times. In the case between Howe and Hunt in the 1850s, the Patent Commissioner explained why Howe was deemed the rightful king of sewing machines despite Hunt having created a machine first:

When the first inventor allows his discovery to slumber for eighteen years, with no probability of its ever being brought into useful activity, and when its only resurrected to supplant and strangle and invention which has been given to the public, and which has been made practically useful, all reasonable presumption should be in favor of the inventor who has been the means of conferring the real benefit upon the world.

Howe won the case, but as the sewing machine grew in popularity, all of the major manufacturers began to make increasingly similar machines. To avoid continual lawsuits over every new model, an agreement forming a business “Combination, ” was reached in 1856. Four major patent holders all agreed that their parts could be used by the others. Additionally Howe was to receive royalties equaling $5 for every machine sold in the United States and $1 for every machine exported. Between 1856 and 1867, when the patent expired, this meant that Howe earned at least $2, 000, 000 in license fees.

Howe, as well as the other sewing machine manufacturers, gained popularity in Cambridge, then Boston, and then around the country and the world. The sewing machine gained popularity amid the industrial boom in America. Howe's machine sped up the production of everything with stitching—from umbrellas to tents—and most especially the clothing industry was monumentally transformed. Ready-made clothing replaced and outnumbered the idea of owning only a few items of clothing. Increased efficiency meant cheaper costs of production, and along with a rise in fashion, people began to own more, mechanically-stitched clothes. As evidenced by the dramatic increase in production and decrease in time it took to make articles of clothing, the sewing machine revolutionized the modern world: