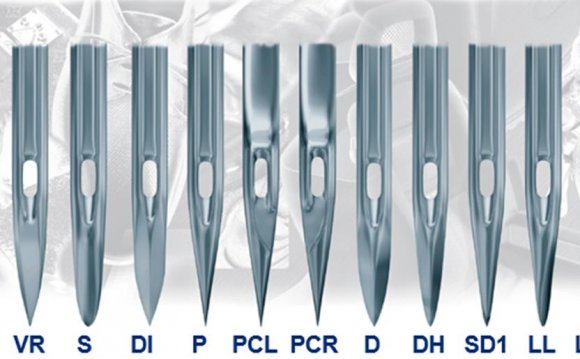 The loop stitch approach is very different from ordinary hand-sewing. In the simplest hand stitch, a length of thread is tied to a small eye at the end of a needle. The sewer passes the needle and the attached thread all the way through two pieces of fabric, from one side to the other and back again. In this way, the needle runs the thread in and out of the fabric pieces, binding them together.

While this is easy enough to do by hand, it is extremely difficult to pull off with a machine. The machine would have to release the needle on one side of the fabric just as it grabbed it again on the other side. Then it would have to pull the entire length of loose thread through the fabric, turn the needle around and do the whole thing in reverse. This process is way too complicated and unwieldy for a simple machine, and even by hand it only works well with short lengths of thread.

Instead, sewing machines pass the needle only part-way through the fabric. On a machine needle, the eye is right behind the sharp point, rather than at the end.

The needle is fastened to the needle bar, which is driven up and down by the motor via a series of gears and cams (more on this later).

There are actually several different types of loop stitches, and they all work a little differently.

Chain Stitch The simplest loop stitch is the chain stitch. To sew a chain stitch, the sewing machine loops a single length of thread back on itself. You can see how one version of this stitch works in the diagram below.

When the needle pushes through the fabric again, the new loop of thread passes directly through the middle of the earlier loop. The looper grabs the thread again and loops it around the next thread loop. In this way, every loop of thread holds the next loop in place.

The main advantage of the chain stitch is that it can be sewn very quickly. It is not especially sturdy, however, since the entire seam can come undone if one end of the thread is loosened. Most sewing machines use a sturdier stitch known as the lock stitch. You can see how the typical lock-stitch mechanism works in the animation below.

The most important element of a lock-stitch mechanism is the shuttle hook and bobbin assembly. The bobbin is just a spool of thread positioned underneath the fabric. It sits in the middle of a shuttle, which is rotated by the machine's motor in synch with the motion of the needle.

Just as in a chain-stitch machine, the needle pulls a loop of thread through the fabric, rises again as the feed dogs move the fabric along, and then pushes another loop in. But instead of joining the different loops together, the stitching mechanism joins them to another length of thread that unspools from the bobbin.

When the needle pushes a loop through the thread, the rotary shuttle grips the loop with a hook. As the shuttle rotates, it pulls the loop around the thread coming from the bobbin. This makes for a very sturdy stitch.