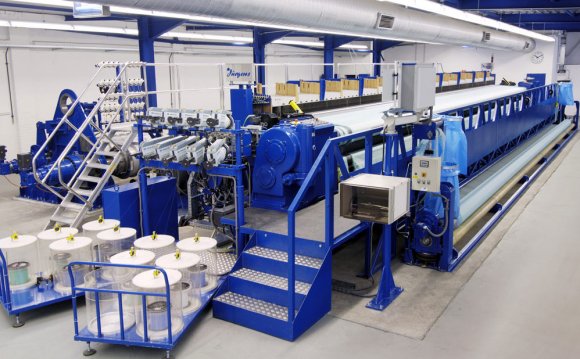 Each Jacq3G module consists of 120 independently acting hooks. The design is modular, allowing the addition of a single module up to 40 total modules on our largest frame. Hook activation is accomplished using minature solenoids. When selected, the solenoid maneuvers a hook wire into position to be captured by a lifting knife. When unselected, the hook wire remains captured by a dropping knife. The lifting and dropping knives work in concert creating a countermarch-type action. And since each hook only moves half the shed height (either up or down), the shed is acheived in half the movement and half the time of rising shed or jack-style systems. Each module also contains the full compliment of heddles, springs, anchors.

Changing the warp sett on a jacquard loom has always been time consuming, tedious work. With some systems, sett changes are not possible without repositioning the module. With others, the process is a lengthy, multi-step process. Not anymore. With Jacq3G, our latest Dial-A-Sett was redesigned to make it the easiest, yet. With a turn of a wheel, expand or contract the hooks to the full width of the loom or down to a tight sett; from 8 to 80EPI (or greater). No more casting out and wasting all those hooks, and no more time consuming reconfiguring of the loom!

The Jacq3G has 3 built in modes of communication:

The electronics were designed from the ground up using the same tried-and-true Compu-Dobby technology. Further, we added a more robust signal transfer between the control box and the modules on the loom ensuring fantastic pattern reliability and to allow greater flexibility in control box placement.

JacqPoint controlling software (by the author of WeavePoint) comes with every AVL Jacquard. JacqPoint reads the J1P standard format, which is currently supported by ArahWeave PE, ArahWeave Super PE, Pointcarre, ScotWeave, JacqCAD MASTER and others. JacqPoint can also import bitmaps from most paint programs like PhotoShop. Whatever your approach, the sky's the limit.

There are two drive options on an AVL Jacquard: air or electric. The countermarch mechanism does more than make the system fast. Take the work out of shed raising with a Jacq3G A-Lift or E-Lift drive system.

Using a standard A-Series frame has many advantages, including lower cost of ownership through common parts, a unparalleled base set of features and a fantastic array of options. Click here for A-Series standard features. Options include:

One could, in fact, conceivably move from a four harness, six treadle modular loom, through a 40 harness Compu-Dobby, and eventually end up on to the Jacq3G; and all on the same loom!

Jacq3G has been designed to accommodate more hooks than any previous AVL Jacquard. It is now possible to accommodate up to 4, 800 hooks on an AVL loom! Of course, loom width limits the number of hooks, so below, we have provided guidelines for hook limits per loom width:

*The Professional Jacquard Rug Loom is the same heavy duty frame found on the Professional Dobby Rug Loom. Options include most available features for that loom frame.

The Jacq3G is becoming a popular loom in college textile programs around the world. One such program getting a lot of attention is the one offered by the Fiber Department at Kansas City Art Institute. You can check out this inspiring video about their fiber program or read this newspaper article that is more specifically about their Jacq3G Loom.

Annette Duchesne Robitaille is one of our favorite Jacq3G weavers. Annette lives in Quebec, Canada with her husband Yves. They own a small art studio where he carves whimsical little creatures and Annette weaves beautiful Jacquard Tapestries. You can take a look at their website here. Here is an informative, illustrated article that Annette put together to show her Jacquard weaving process using ArahWeave: PDF Document