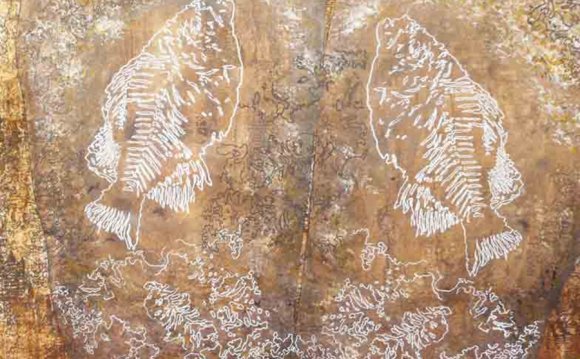 Brown Kimonge, father of five and screen printer at the Wildlife Works Kasigau REDD+ Project screen printing facility, is the subject of our latest who’s who post.

“I started work at Wildlife Works in January 2012, ” Brown recalls.

Born into a polygamous family in 1962, Brown was the fourth of twelve children. For as long as he’s able to recall, life has been a consistent struggle for survival. Like most children in rural Kenya, Brown walked to school barefoot and undertook menial jobs, including fishing at the local dam, to supplement his family’s income.

Fortunately, Brown was able to progress up to his ‘O’ levels (standardized tests for high school-aged students) and did his certification exams at Waa Secondary School. Upon completion, Brown was offered an apprenticeship at his older brother’s screen printing firm at Huruma estate in Nairobi.

Brown says, “screen printing is my entire life, ” and indeed, since the time he set foot in his brother’s firm about 30 years ago, Brown has maintained his livelihood by working as a printer in various facilities.

During Brown’s time in Nairobi, his homeland of Taita was in the process of change as Wildlife Works had established a screen printing department. The facility provided jobs to the local community and drew others who, like Brown, were looking for work. After an interview in November 2011, Brown was admitted into the Wildlife Works taskforce as a screen printer in January of the following year.

Brown’s job at the company involves printing labels and graphics on garments for clients. He is assisted by a team of three other workers; Peter Syala is the company’s color mixer, Mike Mwandisha handles embroidery, while Alan assists with various other tasks in the printing facility.

Brown views his career journey as a childhood dream culminating into reality, as he had always been fascinated by how text and graphics ended up on t-shirts.

Watching Brown on the manual press, his bifocal glasses used to observe every detail, there is little doubt as to his level of professionalism. He hopes in the future that the company will expand its customer base to create even more work for him and his team.

As he works to provide for his wife and five children, Brown hopes to add more skills to his repetoir. In the future, he plans to register for computer and driving courses. But for now, he enjoys watching the successes of his children, especially his older two, who have both completed their “O” level studies, and will soon attend college.